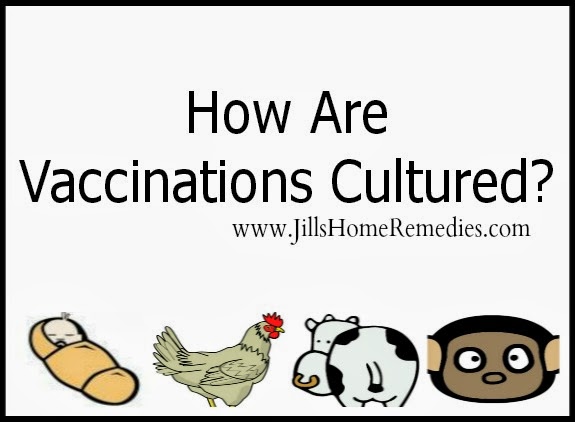 One reason this is not such a great idea is that it is very difficult to monitor the animals from which the culture is taken, to make certain they are in the best of health.  The animals may be carrying bacteria or viruses that could contaminate the vaccines.  There have been instances in the past when animal viruses have been found in vaccinations.

Another reason is that directly injecting animal tissue into a human can create autoantibodies.  These autoantibodies attack the body’s tissues, organs and/or healthy cells.  This of course is what leads to autoimmune diseases.  The number of cases of autoimmune diseases is greatly on the rise in our day.  According to the Self-Organized Criticality Theory of Autoimmunity Study, chronic diseases are eventually inevitable for those who are vaccinated.

And that’s not all.  There’s even more.  And it gets worse.

I was blown away when I found this out in my research.

You see, I am pro-life.  I believe that life begins at conception.  When one cell multiplies into millions of cells – it is alive.  When a heart starts beating 22 days after conception – it is living.  Abortion is killing a baby.  Killing is murder.  I cannot take part in this.  A growing number of parents are finding this fetus culture fact, and are outraged that the information has not been disclosed to them before.  In the vaccination ingredient list, the aborted cells are referred to as “human diploid tissue”, thus admitting that they have killed a human.

This is a moral issue for me.  I will not be in support of, nor partake in vaccinations that were cultured on aborted fetus cells.  Ever.  End of story.  If anyone argues in favor of any of the vaccinations that contain such cultures, my answer will always be that innocent lives were used in the manufacturing process.  Some doctors believe only a small trace of these cells may still be in these vaccinations, and don’t believe it should be an issue.  But it is for me.

The vaccinations listed below are in no way a complete list of vaccinations and the culture media that is used.  I’ve chosen to cover the cultures of the ten vaccinations that are recommended for children ages birth to 6 years old.

The vaccinations listed below are recommended by the Center for Disease Control for the 2013 Immunization Schedule:

DTaP {Kinrix & Pediarix} {Given at 2 months, 4 months, 6 months, 15 months, 18 months and 4-6 years old}
{Diphtheria, Tetanus, Pertussis vaccine}
Culture: Monkey kidney cell
*The other versions of the DTaP vaccine are cultured on synthetic cultures, which include aluminum, a toxic heavy metal.

Hib {All varieties} {Given at 2 months, 4 months, 6 months, 12 months, 15 months}
{Vaccine for meningitis, pneumonia, and other infections caused by the Haemophilus influenzae type b}
Culture: Synthetic or semisynthetic, or yeast, yeast extract {contains the heavy metal, aluminum hydroxyphosphate sulfate}.

Influenza {Afluria, Fluarix, Flulaval, Fluvirin, Fluzone} {Given monthly from 6 months through 23 months, and then once a year}
{Flu vaccine}
Culture: Egg Protein
*FluMist is cultured on chicken kidney cells and egg protein.

PCV {Pneumovax} {Given at 2 months, 4 months, 6 months, 12 months, 15 months}
{Vaccine for pneumococcal disease}
Culture: Bovine protein {cow tissue}
*The Prevnar variety is contains aluminum in its culture, which is a toxic heavy metal.

You may wonder why I don’t give my girls the vaccinations that are not cultured on aborted fetuses or animal tissue.  One reason is because the others are cultured on synthetic or yeast cultures, which contains the heavy metal aluminum.  Aluminum is toxic to the brain and nervous system.

Besides the culturing process of vaccinations, there are other reasons I choose not to vaccinate.  Hang in there.  Stay with me.  We still have to cover other topics such as: the other ingredients in vaccinations, are vaccinations proven to be effective, can they cause autism and SIDS, and more!

I hope you’ll follow me through this series to discover why this mom has jumped from the pro-vaccine side of the fence to the opposite side. {I seriously used to argue under my breath when I heard of people that were against vaccinations.}

I love my readers and welcome comments and questions.  I appreciate everyone being kind and considerate in the last post.  I have decided that I will not publish any more comments that contain links.  One reason is because I feel that some of the authors behind the links are not honest, or I completely disagree and there is not enough room or time for me to share my view on the  links in the comment section.  Most of the things contained in the links should be addressed in future posts.

Feel free to email me any links, and I may be able to address them in future posts:  jillshomeremedies@gmail.com

*Disclaimer: I am not a professional, nor a doctor.  Nothing I say has been evaluated by the FDA and is not intended to treat, cure or prevent disease.

Shared at:
A Mama’s Story    What Joy Is Mine    The Modest Mom    Growing Home
Time-Warp Wife    Walking Redeemed    A Wise Woman Builds Her Home
Raising Homemakers    Deep Roots At Home