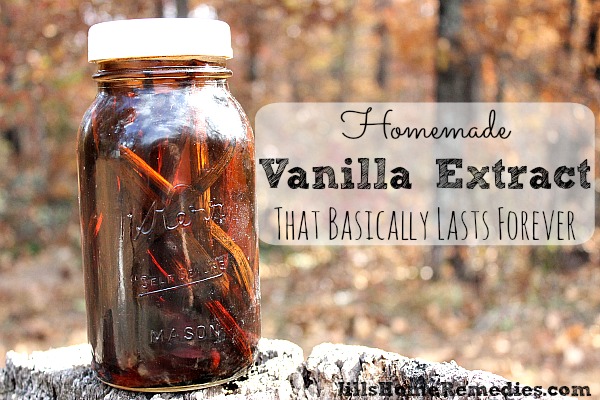 Vanilla extract is one of those things that can get expensive to buy, and is so simple to make yourself!  It is now on my list of “never need to buy again”.

Now if you compare real vanilla, whether store bought or homemade, to the imitation vanilla, the imitation stuff does come out cheaper.  BUT, imitation vanilla is no more than chemically flavored water and doesn’t even belong on the shelves in my opinion.  Our body has no idea how to process these chemicals, so let’s stick with real ingredients!

If you buy vanilla extract online in bulk, it’s over $30 for a quart.  Buying the smaller sizes at a local store is even more expensive.  I can make a quart jar of vanilla extract for less than $20.  I can also make it even less expensive than buying it, and I’ll show you how to make vanilla extract that basically lasts forever!

So how can homemade vanilla extract “last forever” you say?

Well, vanilla extract is made with vanilla beans and alcohol – that’s it!  For my extract, I reuse the same vanilla beans over and over, just adding more liquid to it as it gets used.  It’s a continuous cycle which results in an affordable, amazing flavored extract that is made from REAL ingredients.  As the extract ages, it only gets better.

But what I do is not strain the liquid at all.  I just leave the vanilla beans in the jar and dip the vanilla out as I need it.  When the liquid gets low, I add more vodka to top the jar off like this… 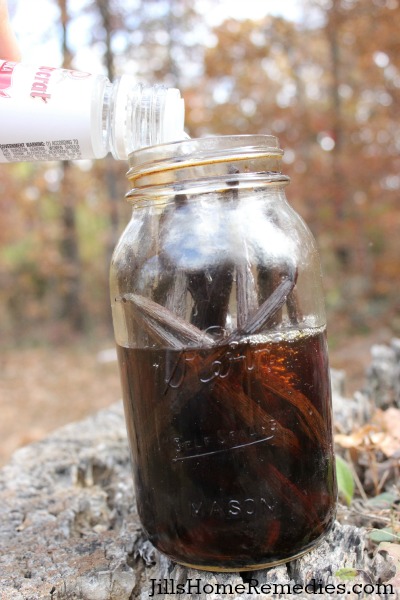 I still shake the jar each time I use it to keep it distributed well.  I believe I made this jar of vanilla 2 years ago, and it has such amazing flavor!  I know some that only use half the amount of vanilla that a recipe calls for because homemade vanilla is so superior, but I tend to use what the recipes call for because I think it just makes the recipe all that much better.

On a side note, if you would prefer a non-alcohol version…

Some people may not use alcohol extracts at all, or find themselves extremely sensitive to alcohol.  You can make a non-alcohol version with vegetable glycerin, but let me mention a few things first:

Ok, now that we have the tips out of the way, let’s get to the instructions!

You don’t have to put the jar in the crockpot, but the heat will assist the glycerin in pulling out the properties.  If you choose not to use a crockpot, you can keep the jar in a cabinet and shake occasionally for 4 weeks.

(You can buy vanilla beans here.)

Have you ever made your own vanilla extract?