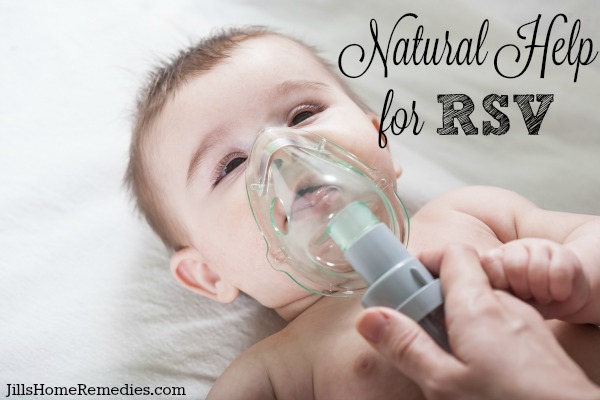 This is the time of year with lots of sicknesses that hits almost every family!  I’ve heard of many cases of RSV going around lately, especially with little babies.

I experienced RSV in 2011 with my then 2-month old.  I know this virus can get pretty scary for infants.  The cases can be more severe in babies under 6 months.

Respiratory syncytial virus infection (RSV) is a lot like a bad cold and it is very contagious.  They say that most children get this virus by the age of two.

The milder symptoms can include:

The more serious symptoms include:

These more serious symptoms can be scary and can cause the lips and fingernails of the child to turn blue from lack of oxygen.  That definitely calls for an ER trip!  It can also lead to pneumonia.

Reagan’s symptoms started off like a cold and developed into more and more congestion, which turned into wheezing.

There’s never good timing for sickness, but Reagan’s wheezing developed at a really bad time.  We had a snow & ice storm and I was unable to take her to the doctor due to them closing their offices for a few days.

Reagan’s symptoms weren’t bad enough to make an ER trip, so I watched her closely at home and used a few home remedies to help things not get serious.  I did take her to the doctor as soon as I could and they tested for the RSV and prescribed a nebulizer.

Here’s what I did to help my baby not suffer as much with this virus:

I began giving her colloidal silver from the beginning when she first showed signs of coughing and congestion.  For her age, I gave 10 drops 3-4 times a day.  When her cough tightened and she started wheezing, I gave her 10 drops of silver every two hours for about three days.  Her cough quickly loosened and became more productive and her wheezing didn’t get serious.  I administered silver for another 5 days 1-3 times a day until I’d given it to her for a total of 10 days.

I also put a humidifier (or a diffuser) on a chair by her bed.  I used the humidifier every day with the oil until her wheezing stopped and congestion was almost cleared.

Although Reagan did show signs of having the serious symptoms of RSV, she didn’t run a fever, lose appetite nor act fussy or sick.  She was her usual happy, smiling self! 🙂  The doctor and nurses all commented that she certainly didn’t act sick, and were surprised at how well she handled the virus. I get this comment often when my children are sick because using natural medicines to assist the immune system makes ALL the difference! I’ve never had a baby sick so young, and I’m glad I was able to ease her sickness at home with simple, inexpensive home remedies!

Have any of your children had RSV? How did you treat it?