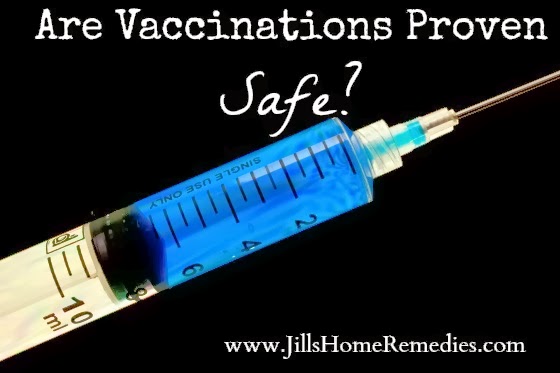 We don’t know the full impact vaccines have on short or long-term health.  Only about half of the vaccine injuries reported are even brought before a court.  Out of those reported, nearly 4 out of 5 cases are rejected.  The studies on vaccines are inadequate.  Most are funded by the drug companies that have financial ties involved.  Many vaccine studies are done by comparing a vaccine against a previously licensed vaccine.  Forgive me, but this makes me laugh.  These studies are of course going to result in similar reactions, allowing the research to say that vaccines are “safe” because the tests have similar results.  I want to see controlled randomized studies conducted comparing vaccines with true placebos.

In 1986, congress passed a law called The National Childhood Vaccine Injury Act of 1986, which “eliminates manufacturer liability for a vaccine’s unavoidable, adverse side effects.” {Read more here}  Why did the court pass this law?  This law was passed because of the dramatic increase of vaccine injury lawsuits in the 1970’s against vaccine manufacturers.  The case of serious vaccine injuries is nothing new.  Many parents have seen the connection between vaccines and a dramatic change in their child{ren} for years.  The courts decided to pass a law to protect the vaccine manufacturers from being liable for vaccine damage because the cases were becoming many in number.

Do you know who is responsible if your child suffers a vaccine injury?

I don’t believe the American government has a right to force anything on its people, especially something that they say is not 100% effective, they hold me responsible for, and that they cannot say is safe.  Which leads me to this thought: the CDC says that “vaccines are actually very safe”, while the Supreme Court says they are “unavoidably unsafe“.  This doesn’t add up to me.


Triclosan is not considered as high of a health concern as formaldehyde, and yet formaldehyde is found in 5 of the 10 vaccinations given to infants and young children!  We are not just washing our hands with formaldehyde, we are directly injecting it into the body of infants through vaccines, which has a far greater impact on their health.  I would really like to see the CDC change their recommended vaccine schedule, recommending fewer vaccinations per visit, and waiting until the child is older.

Here’s some more food for thought:

In 2012, 35 people were infected with a strain of salmonella found in peanut butter.  Result: FDA recalled

In 2012, 32 people were sickened by an E.coli outbreak found in spinach.  Result: FDA recalled

Thousands of people have died or been injured from vaccinations.  Nothing is done to conduct proper safety studies, find safer ingredients, or reduce the number of vaccinations given at one time and to infants so young.

Vaccinations may offer some protection against diseases, but at the expense of who?  Thousands of other children?  Some say that a few have to be sacrificed for the better of the whole, but I believe there’s a better way.  I don’t believe vaccinations are to be credited for the major reduction in disease.

Now your interest may be piqued as to what I believe is to be credited for the reduction in disease, and that is something I will cover in more detail in the next post.

*Disclaimer: I am not a professional, nor a doctor.  Nothing I say has been evaluated by the FDA and is not intended to treat, cure or prevent disease.